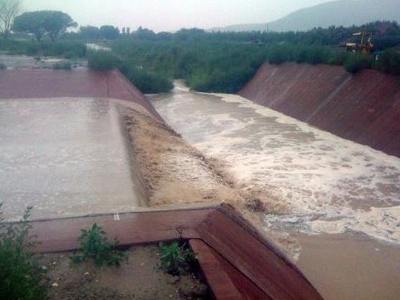 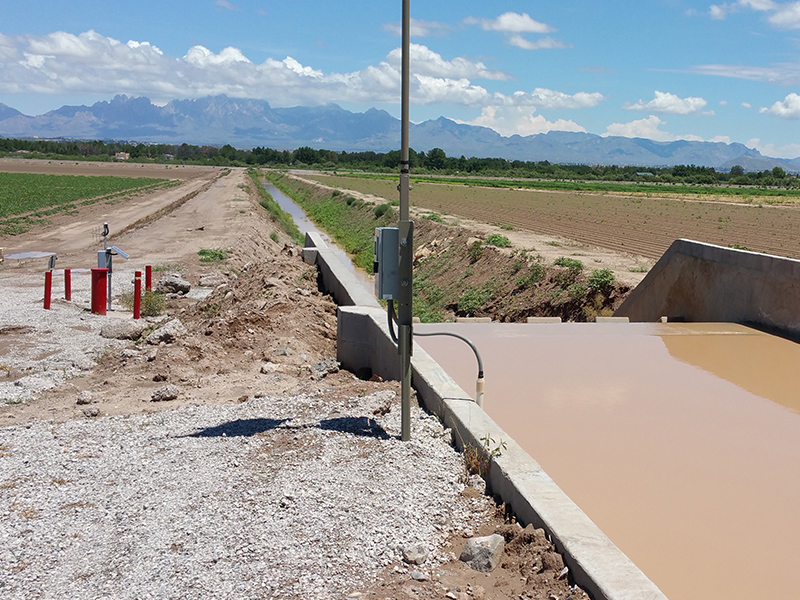 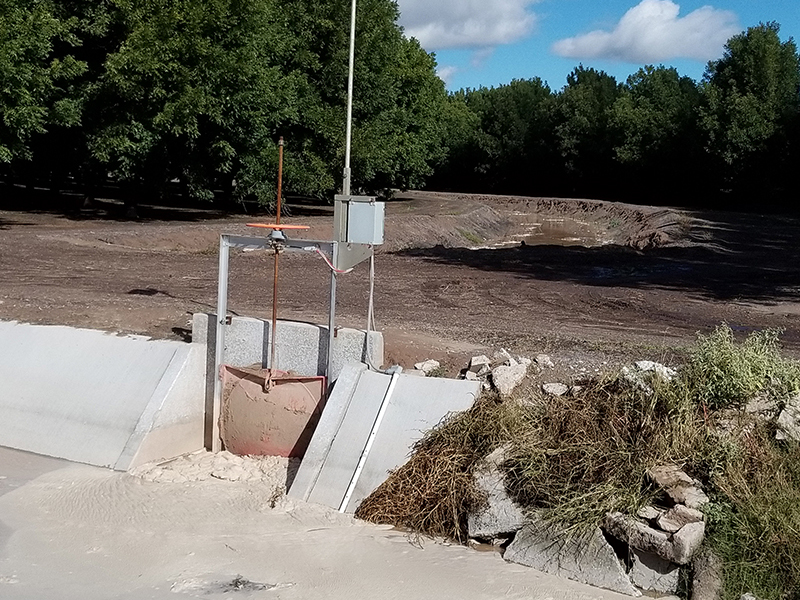 Persistent drought conditions in the Mesilla and Rincon Valleys of southern New Mexico have led to significantly decreased surface water allotment to farms.  To offset these shortages, farm irrigation groundwater well pumping has been prevalent in the region, resulting in declining groundwater aquifer levels.  A critical need to examine and implement alternative water sources to supplement farm irrigation has developed due to these conditions.

To assist management and field personnel, EBID has also implemented OneRain Contrail, a comprehensive water management software package created specifically for rainfall monitoring.  Development of this monitoring system has been aimed at potential flood warning alerts, flood control dam safety, as well as the ability for EBID to capture and divert storm water run-off for the purpose of farm irrigation and potential aquifer replenishment. 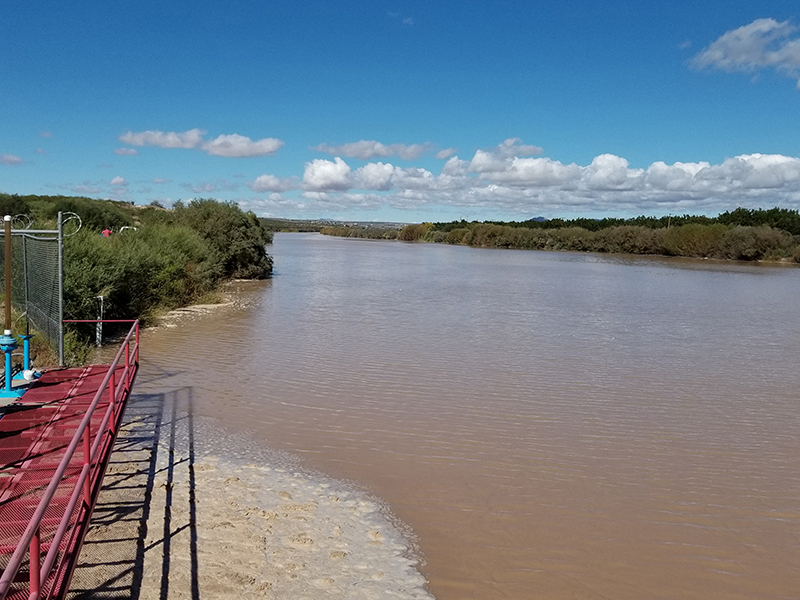 Stormwater Filling up the Rio Grande at Mesilla Dam 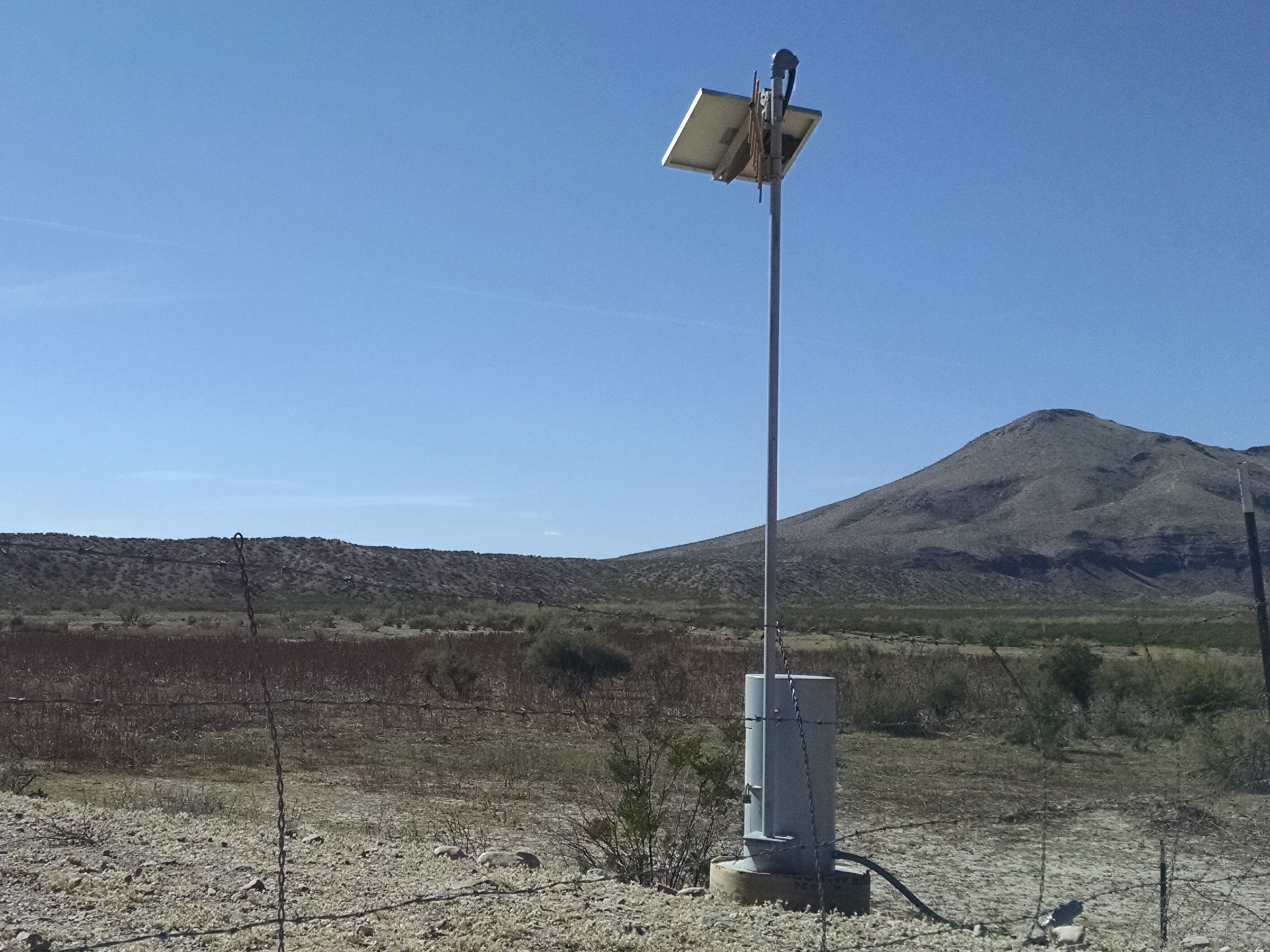 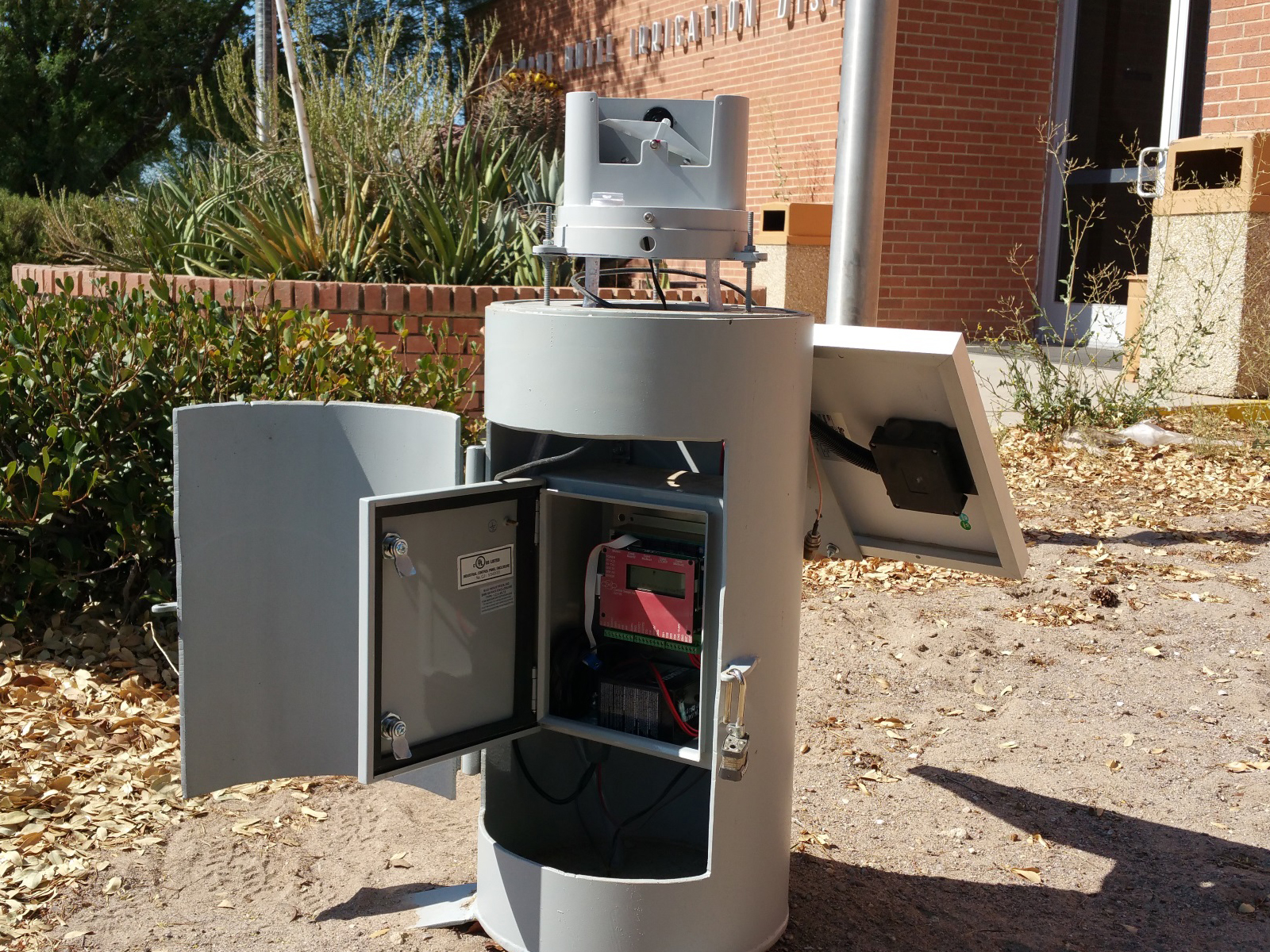 From 1979 to 2002, EBID delivered 36 inches or 3 acre feet to our farmers, a total which is considered full surface allotment. Beginning in 2003, severe prolonged drought conditions took effect, greatly reducing the amount of surface water delivery. To offset surface shortages, groundwater pumping increased in order to meet full allotment requirements. The graph below shows the varying levels of surface water allotment during this drought.

In Depth Look at Stormwater Capture

EBID’s stormwater capture program is primarily concerned with promoting irrigation efficiency in the conjunctive management of hydrologically interrelated surface and groundwater within the District boundaries.  We refer to irrigation efficiency in this sense as delivering more surface water for irrigation with the same or less carriage loss than would have otherwise occurred in the absence of stormwater, and/or as reducing, in any amount feasible, the amount of groundwater that would have otherwise been extracted from the aquifer through well pumping to meet crop requirements in our conjunctive use system to instead be met with surface stormwater.  In either case, the goal is to promote groundwater resilience and mitigate aquifer stress caused by well pumping, especially during periods of protracted drought when aquifer recharge is reduced due to reduced useable surface water in Project storage (i.e., Elephant Butte Reservoir) and groundwater extraction from well pumping is increased.

EBID refers to groundwater resilience as the capacity of the aquifer to absorb variable pumping stress while retaining the same basic functionality in the context of variable surface water availability and recharge, in an interrelated system (Fuchs et al., 2018).  However, this is not an expression of sustainability.  Conjunctive use assumes aquifer resilience, such that pumping stress is absorbed, but not necessarily during drought, at least not indefinitely.  If drought conditions are severe and persist long enough, then all other things being equal (i.e., groundwaterextractions remain unabated and/or in excess of recharge), resilience limitations will eventually be reached, and the system may no longer be sustainable, regardless of the potential for resilience or how it is defined.  With this understanding, EBID acknowledges the groundwater-surface water conjunctive use ratio of application (GSRA), defined as the total volume of groundwater extracted and applied for irrigation per unit time, divided by the total volume of surface water diverted and applied for irrigation per unit time, within a common river basin and hydraulically interrelated aquifer system (Fuchs et al., 2018).  The term is specific to water resource settings that are, or should be, conjunctively used and managed.  The significance of the GSRA as a metric of aquifer resilience is that over time, even in the absence of more detailed information specific to net depletion (i.e., evapotranspiration) that is typically much more difficult to accurately assess, the GSRA can serve as an indicator of aquifer stress relative to surface water availability and potential recharge. The GSRA can therefore also serve as a metric fordetermining steady state conditions (i.e., a circumstance where net change in aquifer storage equals zero).

EBID promotes groundwater resilience by actively diverting stormwater that reaches the Rio Grande below Caballo Dam at strategic locations into District conveyance structures (i.e., canals) to make such waters an additional part (above the useable water available for release from Elephant Butte and Caballo Reservoirs within the year) of the District surface water supply to irrigate lands within the year and season the stormwater is captured.  Typically, this is only a matter of days following the capture of stormwater before the water can be used to help satisfy an order for water from one or more EBID members to irrigate, which promotes irrigation efficiency because a like amount of useable surface water in Project storage is conserved to help satisfy other orders and deliveries within the season.  Furthermore, the use of stormwater in place of groundwater extraction from well pumping may improve (lower) the overall GSRA, thereby reducing aquifer stress and facilitating aquifer recharge.

EBID’s stormwater capture program has been further refined to promote targeted aquifer recharge in areas within the District that are known to experience, on average, more persistent or greater net losses from shallow aquifer storage due to concentrated well pumping and overlapping cones of depression.  This is done by determining where within the District the greatest net losses from storage are occurring, through EBID’s groundwater monitoring program as measured fluctuations in the water table throughout the District over time.  The basic assumption is that the rise of the groundwater level in unconfined aquifers is caused by the response to the infiltration of water (rainfall, irrigation, etc.) arriving at the groundwater table (recharge).  Knowledge of local aquifer properties, including the specific yield of the shallow alluvium aquifer, enables calculation of storage changes to then rank or classify areas where targeted recharge should be a priority.  Targeted recharge benefits not only groundwater users in the immediate vicinity of the storage void, but also the collective District.  This is because any one, larger void in shallow aquifer storage in the District may ultimately be filled (recharged) by surface water originating upstream that all EBID members would, eventually, otherwise have access to.  Knowledge of recharge priority site locations enables EBID to then modify conveyance infrastructure to concentrate captured stormwater in the system, such as in a drain in immediate proximity to the site, to approximate an infiltration gallery for as long as the stormwater, in whatever volume captured, is available.

EBID has produced measurable results of fluctuations (temporary rises persisting for days or weeks at a time) in the local water table at recharge sites following capture and diversion of stormwater, during and after storm events in recent years.  As expected, larger and longer storm events provide more opportunity for capture for direct use or targeted recharge, and while local precipitation alone may be argued to be a minor component of the area water budget, stormwater capture offers an important part of promoting groundwater resilience within the EBID and should continue to be pursued.
Literature cited:  Fuchs, E.H., Carroll, K.C., King, J.P. (2018).  “Quantifying groundwater resilience through conjunctive use for irrigated agriculture in a constrained aquifer system”.  Journal of Hydrology 565:747-759. 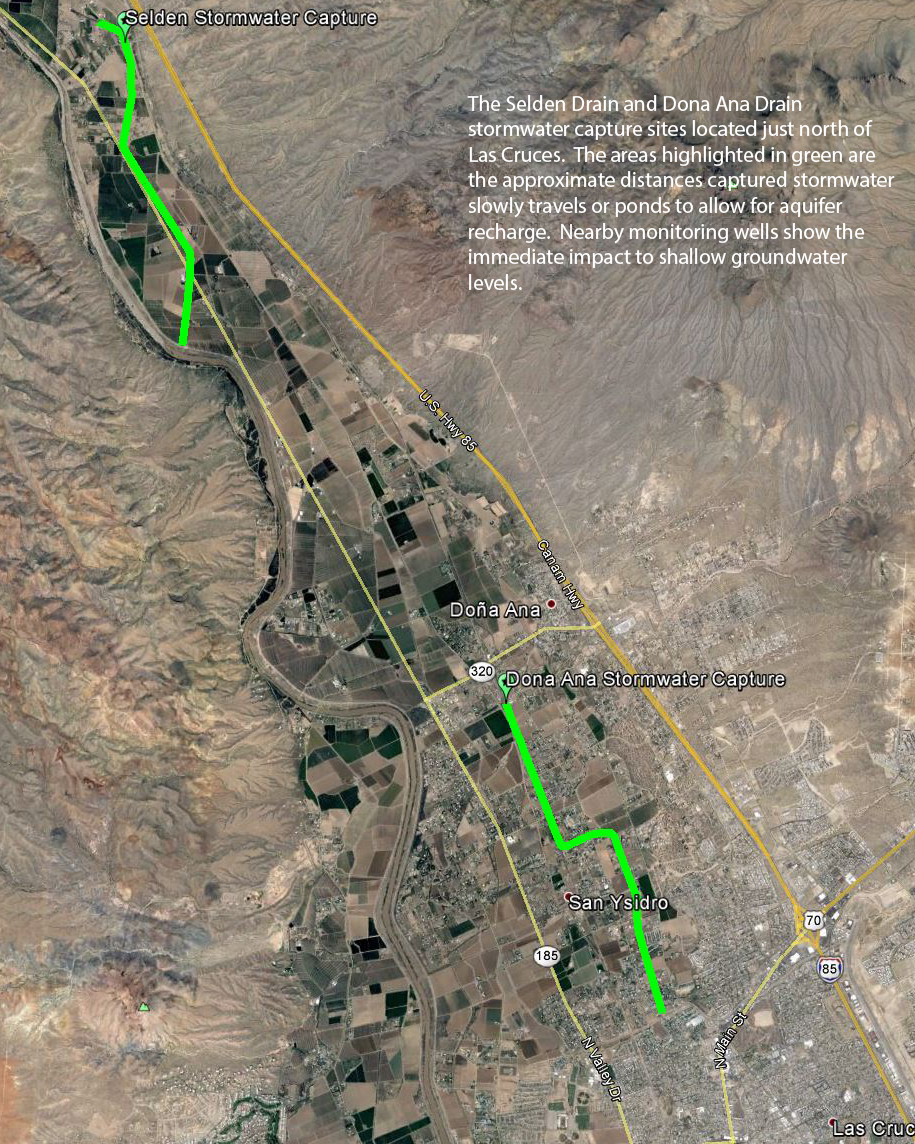 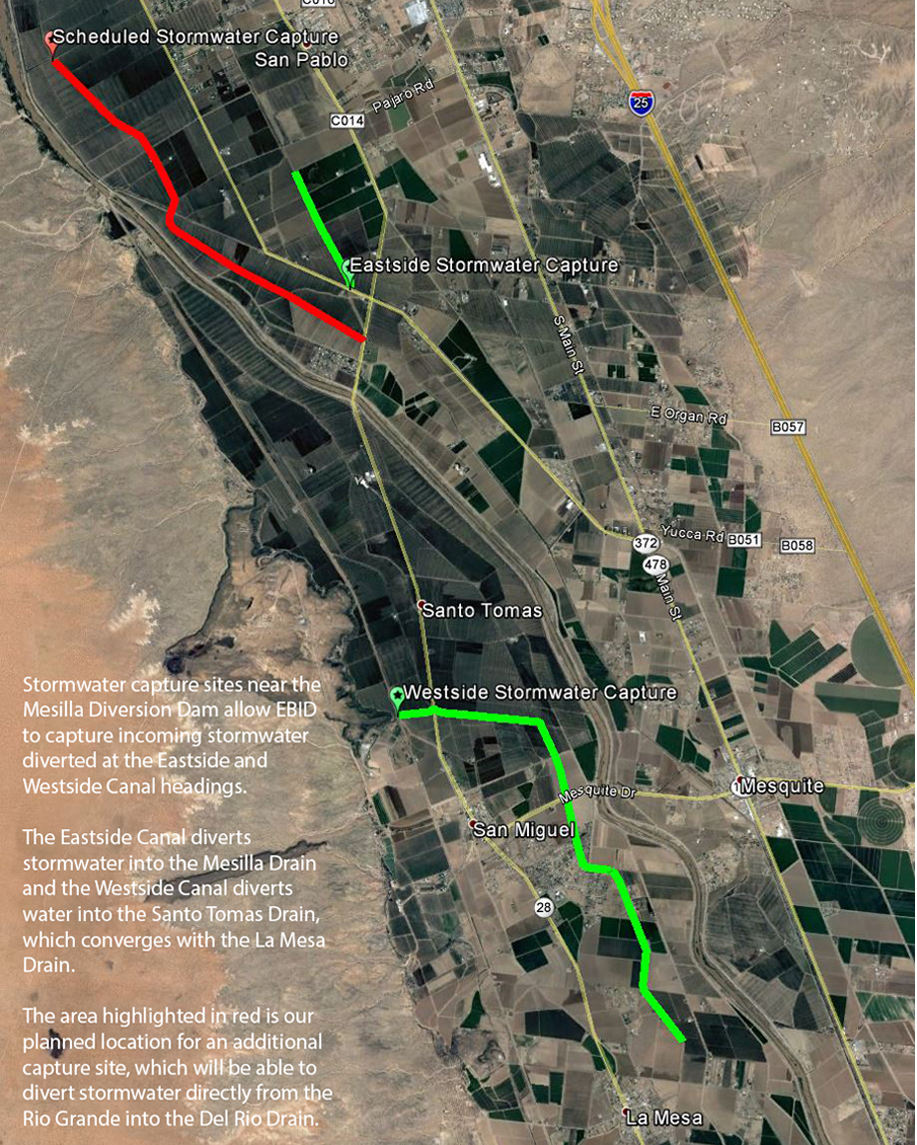 Expansion of the Capture Program

While the stormwater management system has already enabled EBID to divert high amounts of watershed run-off, the system is largely predicated on field personnel to visit and adjust canal diversion gates and stormwater capture turnout gates.  Storm activity that occurs in non-irrigation season, during non-work hours is problematic and does lead to missed opportunities for capture.

Non-irrigation season storm events have typically produced the highest amount of captured water due to the Rio Grande River channel and EBID canal systems being dry.  Automation of canal diversion gates and stormwater capture turnout gates would allow for remote setting of these gates by EBID personnel during off-hours. Automation and SCADA control would increase the amount of captured water, which in turn would enhance the benefit towards aquifer recharge.  Improved early warning alarms are also needed to enable EBID personnel the necessary time to prepare.

EBID is currently working with the Bureau of Reclamation on the final award details for a WaterSmart grant, which will add sixteen rain gauges to critical watershed areas, improve arroyo channel monitoring with the installation of down-looking radar sensors, add gate automation to stormwater capture sites, and facilitate the construction of a new Rio Grande metering cable near the historic Hayner Bridge site.  This new metering cable will allow EBID to accurately track the increased flow of the river caused by stormwater in our northern watershed areas, which increases early warning alarms to enable field personnel to prepare for stormwater capture.

In late 2015, EBID installed the first stormwater capture site off the Leasburg Canal as a proof of concept. A non-irrigation season storm event occured that allowed EBID to divert over 18 million gallons. In 2016 EBID installed three additional stormwater capture sites that have captured nearly 750 million gallons of stormwater or a 2,296.5 acre foot equivalent. EBID is planning one additional capture site locted near Mesilla Diversion Dam that will have the ability to divert stormwater directly from the Rio Grande River channel.